Love Louisiana? (Me too!) Love the blues? Check this out... 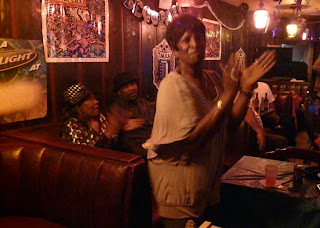 It's a blog documenting the efforts of audio documentarian Richard Ziglar and reporter Barry Yeoman, a native Louisianan to chronicle their "...research and travels as we produce the one-hour radio documentary Still Singing the Blues." The actual documentary, they say, is scheduled to air in the spring of 2010.
Posted by Elizabeth DeVita-Raeburn at 12:13 PM

Howdy! This is Richard Ziglar, co-producer of Still Singing the Blues. Thanks for the mention about our documentary.

I wanted to give you an update.

This work was originally conceived as a 55-minute radio documentary that would "burrow into the lives of three outstanding older performers"... the problem is that there is way too much talent in South Louisiana to squeeze into one hour. So now we have expanded it to be a two-part series. The first part has just been released. It features Carol Fran of Lafayette, Harvey Knox of Baton Rouge and Little Freddie King of New Orleans. Radio stations can download it for free (and any registered listener can hear it for free) at the prx.org website. Still Singing the Blues has its own dedicated website as well as a presence on FB. Please take a listen and see what you think: