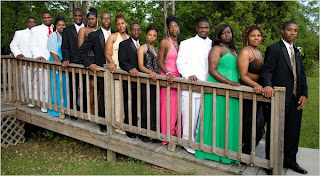 More ruminations on race... The May 24th issue of the The New York Times Sunday Magazine (yes, yes, I'm way behind in my reading) featured a photo-heavy essay called "A Prom Divided," by Sara Corbett and Gillian Laub, on the fact that Montgomery County High School in Georgia has two proms for its seniors: a white one and a black one. The two are held in the same place, a night apart.

Apparently, this phenomenon is not all that unique. And, according to the article, it has more to do with the parents of these kids than the wishes of the students themselves. I had no idea...I'm always shocked by both the persistence of blatant racism, and my ignorance of it. I'm reminded, all the time, that, as a white person, I have the privilige of not having issues of race forced in my face all the time.

I can't help feeling, as I look at these pictures, that the white kids look happy, and the black ones look kind of depressed. Am I just projecting? I don't know. But I find the pictures haunting. For some reason, my white prom picture showed up blurry...click on the link to the article to see them more clearly.
Posted by Elizabeth DeVita-Raeburn at 12:19 PM No comments:

Was Atticus Finch such a hero? 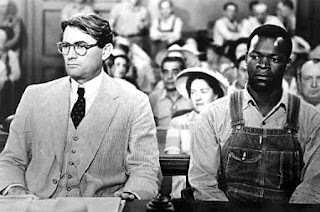 I'm catching up with New Yorkers (Paul hoards, then passes them to me in a pile, where they sit, taking up space on my dresser, until I make a desperate plunge through them.)

One article that caught my eye--especially in light of our recent trip to Louisiana, and the earlier post "Someone's in trouble..."--was a piece by Malcolm Gladwell called "The Courthouse Ring."

In it Gladwell uses the work of legal scholar Steven Lubet to bring Atticus Finch, the beloved and seemingly just character from Harper Lee's classic "To Kill a Mockingbird," down a peg on the schema of literary figures deserving of reverence.

Finch didn't represent a new, non-racist shift in the south, says Gladwell (and the scholars he's quoting). He represents "Old-style Southern liberalism--gradual and paternalistic...." Whoa. Talk about a shift in perspective.

It's an interesting piece. And probably quite right. I, like many, I suspect, had just never thought of it like that before.

What cracked me up, being rather baby-name oriented these days, is the recent trend toward Atticuses at the playground...We're still struggling with a name, but Atticus isn't on the list.
Posted by Elizabeth DeVita-Raeburn at 6:16 AM No comments: 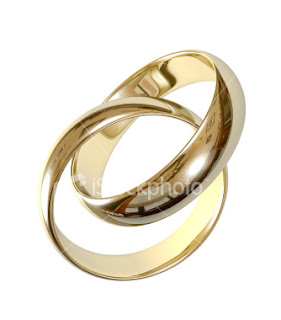 Last week, Beth Humphrey, 30 and her boyfriend, Terence McKay, 32, both of Hammond, Louisiana, went to get married by the local justice of the peace. But Keith Bardwell, justice of the peace for Tangipahoa Parish's 8th Ward, refused to issue a marriage license to them because Humphrey is white and her boyfriend is black. He said he was doing it for the sake of any children who might be born of the marriage, and because, in his experience, these relationships didn't last.

It's a shocking story. I think one of my Facebook friends who noted it said something like "Helloooo 1950s!" Actually, we didn't manage to get this kind of racism off the national slate until 1967, when The U.S. Supreme Court tossed out racially based limitations on marriage in the landmark 1967 Loving v. Virginia case:

"In the unanimous decision, the court said that 'Under our Constitution, the freedom to marry, or not marry, a person of another race resides with the individual and cannot be infringed by the state.' (From CNN)

Guess Bardwell doesn't keep up with the law.

Meanwhile, I'm kind of blown away by Republican Governor Bobby Jindal's response: "This is a clear violation of constitutional rights and federal and state law. ... Disciplinary action should be taken immediately -- including the revoking of his license," he told CNN.

I double-checked his party status after reading that quote.

I think Jindal deserves some props from Keith Olbermann and Rachel Maddow on this one.
Posted by Elizabeth DeVita-Raeburn at 6:09 AM 1 comment: 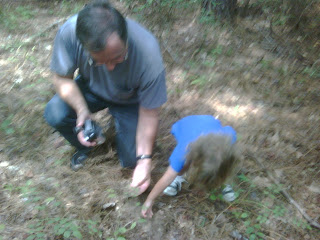 Paul and Henry touching the land.....
You wouldn't know it to look at this blog, but we (Paul, Henry and I) went down to Lousiana the first week of September. The main objective: To go look at a piece of land inherited by mother, which will, someday, be mine. I wanted to get a sense of what this whole attachment to land thing--a foreign concept to a born suburbanite, now urbanite apartment dweller--means.
Would I just feel it?
We started out in New Orleans, then drove to Baton Rouge, and from there, north to the outskirts of Clinton, Louisiana, where the land is. There's lots more to tell...but, for now, let's just say I'm still trying to understand the land thing.
Meanwhile, I came across an interesting quote in the beginning of Diane McWhorter's Pulitzer Prize winning book, Carry Me Home: The Climactic Battle of the Civil Rights Revolution. And here it is:
A landscape to be seen has to be composed,
and to be loved has to be moralized.
-George Santayana, The Sense of Beauty
What do you think it means?
Posted by Elizabeth DeVita-Raeburn at 2:19 PM No comments: